A new underground tunnel, which is far below the sea level, has been discovered in the world’s largest cave Son Doong in the central province of Quang Binh. 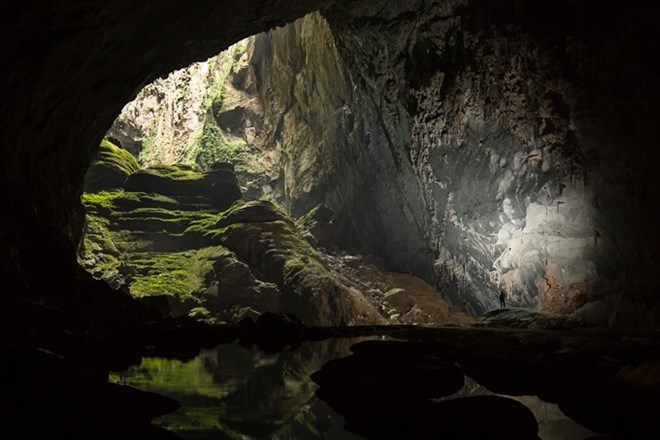 Hanoi (VNA) – A new underground tunnel, which is far below the sea level, has been discovered in the world’s largest cave Son Doong in the central province of Quang Binh.

The information was disclosed at an international press conference on the latest diving expedition inside the cave in Hanoi on April 9.

The research diving trip made by a team including British divers Richard Stanton, John Volanthen, Jason Mallison and Chris Jewell, who were members of the rescue team saving the Thai football team trapped in Thailand's Tham Luang Cave last year.

The research began this month and the divers started work at the end of the river inside Son Doong and went further into a water passage. The trip was expected to prove that the passage connected Son Doong and the Thung Cave, which is a cave of the same type laying 600m away.

The expectation was based on results made by the British Cave Research Association’s team, who were the first to explore Son Doong, following a survey they did in 2010.

However, the passage was actually not in a straight line and it went deeper underground, said Volanthen at the media briefing. He said the divers found a hole inside the passage and that hole leads to a tunnel.

“The actual depth of the tunnel could be 100m or more. I managed to reach a depth of 77m and couldn’t go further due to the failure of equipment,” said Mallison.

“We will take a second research trip to the tunnel next year,” said Nguyen Chau A, Oxalis director. He revealed at the press briefing that at first the diving expedition in Son Doong was initiated as an award for the heroism of Tham Luang’s British divers but later turned out to be the toughest task.

Howard appraised the early success in finding the tunnel and described the diving as one of the most “difficult and challenging tasks”.-VNA