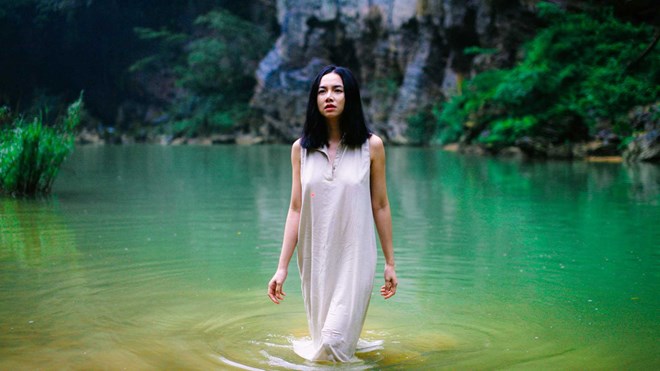 A scene in “The Immortal” (Photo: zingnews.vn)

Hanoi (VNA) – Vietnamese pristine plateaus, magnificent caves, gorgeous beaches, and great mountain ranges are idyllic setting of the blockbuster “Nguoi bat tu” (The Immortal) by famous Vietnamese US director Victor Vu, which is set to come out on October 26.

As “The Immortal” tells the story of Hung, who has lived through three centuries with hatred and an ambition to change the human history, it took the film crew three years to find suitable contexts and design brackground to fit various historical periods.

Most of the scenes were shot in Quang Binh province with breathtaking Tu Lan cave, Ho Chi Minh Road, and Da Nhay beach, among others.

Also, the film will give the audience an insight into old villages of Cuu (in Phu Xuyen district, Hanoi), and Nom (Hung Yen province) as well as ancient villas in Tien Giang and Dong Nai provinces.

Cultural element like traditional customs, lifestyles, architecture, music and costumes will be highlighted through the film.

According to the provincial Department of Tourism, Quang Binh has a 116.04-kilometre coast line with sprawling beaches like Nhat Le, Bao Ninh, Quang Phu, Da Nhay and Hai Ninh. In addition, the locality is home to attractive such tourist destinations as the UNESCO World Heritage Site Phong Nha-Ke Bang National Pak and the world’s largest cave- Son Doong.

In the first nine months of this year, the province welcomed more than 3 million visitors, up 18.4 percent from the same time last year. Among them, over 129,700 are foreigners, a year-on-year surge of 27.2 percent. The province raked in 3.3 trillion VND (140.9 million USD) from tourism revenue, 19.5 percent higher than the 2017’s January-September period.