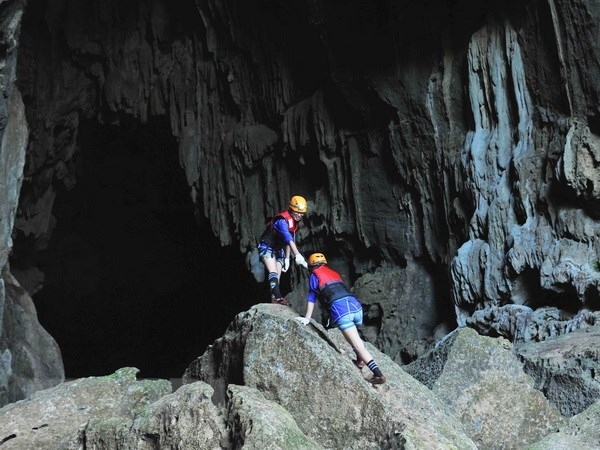 The province has big advantages to develop cave, forest and sea-based tourism.

Phong Nha – Ke Bang National Park, which was twice recognised as world natural heritage sites by UNESCO in 2003 and 2015, is a paradise for cave explorers.

It was listed among the “Top experiences in Vietnam” in 2017 by Lonely Planet – a renowned travel publication.

The park contains the oldest karst mountains in Asia, formed approximately 400 million years ago. Riddled with hundreds of extraordinary cave systems and spectacular underground rivers, Phong Nha is a speleologists’ heaven on earth, the site said.

“The caves are the region’s absolute highlights, but the above-ground attractions of forest trekking, the area’s war history, and rural mountain biking means it deserves a stay of around three days”, the travel site added.

Located in the heart of Phong Nha – Ke Bang Nation Park is Son Doong cave, the largest of its kind in the world recognised by three international organisations, namely Guinness (based in the UK), the Association World Record (based in Hong Kong) and WorldKings (based in the US and India).

Son Doong was discovered by a local in 1991. It was first explored in 2009 by The British Vietnam Caving Expedition Teamand has been open to the public since 2013.

The 1,645m-long cave system, which extends through a mountain, was named one of the most captivating caves on earth by National Geographic.

The road to the tomb has 103 stairs, 103 apricot trees and 103 Ban (Bauhinia) flower trees representing the General’s 103 year olds.

Vo Nguyen Giap (1911-2013) was the first general of Vietnam’s People’s Armed Forces, commander-in-chief of Dien Bien Phu campaign (1954). In 1984, the New Encyclopedia Britannica – one of the most massive encyclopedia in the world – voted General Vo Nguyen Giap as one of the 10 preeminent generals of the world.

Vung Chua – Yen island had been chosen by the General as his last resting place. Owning spectacular and pristine natural scenery, Vung Chua area backs to Tho Son mountain and faces East Sea with many islets. General Giap’s tomb is located in Mui Rong (Dragon Cape) reaching to the sea and being opposite to Yen island.

With a coastline of 116km dotted with white beaches sloping into the blue sea, Quang Binh holds great potential for developing marine tourism. Nhat Le beach has become a familiar destination for tourists on summer vacations.

It was selected as one of the top ten most attractive beaches in Vietnam by the Vietnam Records Organisation (VRO) in 2015.

Nhat Le – the unspoiled and tranquil beach with azure, bath-warm water and beautiful stretches of white and creamy sand is definitely the great option for those who are fond of getting some fresh air and falling asleep to the sound of the lapping wave, swimming in the sea and savouring freshly caught seafood.

According to the provincial Department of Tourism, Quang Binh welcomed 3.3 million visitors in 2017, up 70.9 percent against the same period last year, including 130,000 international tourists, up 156 percent. The tourism sector grossed over 3.7 trillion VND (161.8 million USD) in revenue.

In the first quarter of 2018, the province served over 727,000 holidaymakers, a year-on-year rise of 12 percent, raking in 820 billion VND in tourism revenue.