Six provinces and cities with strong tourism industry introduced their most attractive destinations to foreign buyers at a workshop in Ho Chi Minh City on September 5. 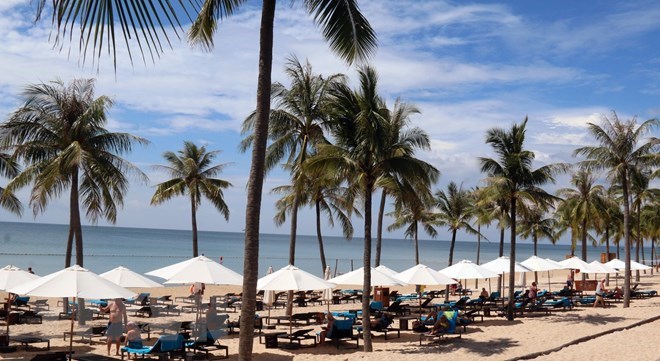 A beach in the southern province of Kien Giang. (Source: VNA)

HCM City (VNA) – Six provinces and cities with strong tourism industry introduced their most attractive destinations to foreign buyers at a workshop in Ho Chi Minh City on September 5.

The event attracted representatives of the tourism agencies of Hanoi, HCM City, Da Nang city and the provinces of Quang Ninh, Quang Binh and Kien Giang, along with nearly 300 international buyers. It was part of the 14th International Travel Expo of HCM City held by the Vietnam National Administration of Tourism and the municipal Department of Tourism.

Introducing her city’s places of interest, Phan Nguyen Thu Suong from the Da Nang Department of Tourism said the central city continues to be one of the most attractive Vietnamese destinations for domestic and foreign visitors.

She added that once coming to Da Nang, visitors can explore cultural values and natural landscapes, join outdoor activities on some of the world’s most beautiful beaches, and enjoy entertainment activities in Ba Na Hills. Notably, the recently-inaugurated Golden Bridge in Ba Na Hills has quickly become a magnet for travelers.

Meanwhile, central Quang Binh province is described as the “land of caves”, including Phong Nha, Tien Son and Son Doong.

A representative of the province’s Tourism Department said the locality will push ahead with tourism promotion campaigns while developing adventure and cultural heritage exploring activities.

At the workshop, foreign buyers also mentioned promotion issues as well as shortcomings of local tourism, including difficulties facing vacationers while travelling on roads in big cities.

Deputy Director of the HCM City Department of Tourism La Quoc Khanh said his city and other localities in Vietnam are making efforts to solve traffic problems. He added that urban railway projects in HCM City and Hanoi will be put into use soon and make it easier for tourists to enjoy their trips in the country.

According to the General Statistics Office, foreign arrivals in Vietnam surpassed 10.4 million between January and August, up 22.8 percent year on year. Visitors from Asia accounted for 77.2 percent of the total, rising by 27 percent. Meanwhile, the number of holidaymakers from Europe grew by 9.8 percent from a year earlier.

The tourism sector aims to serve 15 – 17 million foreign visitors this year, up 16 – 30 percent, and about 80 million domestic travelers. –VNA