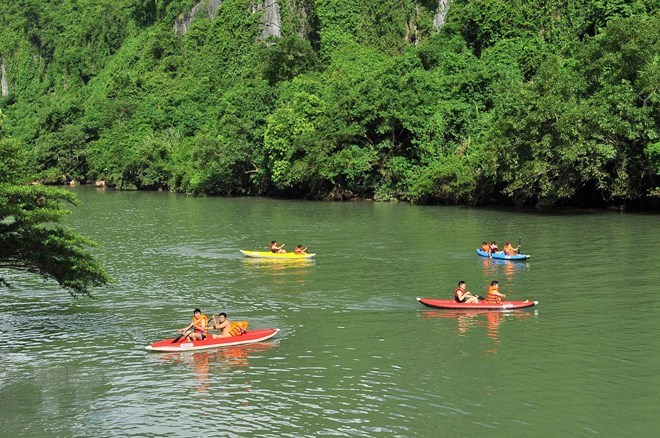 Deputy Director of the provincial Department of Tourism Dang Dong Ha said that in order to realise these goals, the tourism sector must continue diversifying and improving the quality of its products and services at popular sites such as the Thien Duong, Phong Nha, and Tien Son caves; Nuoc Mooc spring; the botanical gardens; and Chay River– Toi cave.

It will also push to develop a variety of branches, such as marine, resort, adventure, and ecological.

The province will continue introducing new tourism products, including festival tours and meeting, incentive, convention, and exhibition (MICE) tourism, as well as promote its strengths in spiritual, cultural, historical, and community-based tourism.

Ha said developing tourism must be associated with the protection and preservation of the ecological environment.

The tourism sector raked in nearly 4.5 trillion VND (more than 192 million USD) in revenue in the year, 20 percent higher than that of the previous year.

The results were attributed to efforts by local authorities to tap local advantages for tourism, focusing on diversifying products.

Quang Binh is home to about 350 tourist accommodation facilities, including one 5-star hotel, five 4-star hotels and eight 3-star hotels. About 40 travel companies are operating in the locality, including 14 international ones.

Local authorities have also worked hard on national, regional and international tourism promotion, while enhancing connection with other localities in this field.

The province also has the longest coastline in Vietnam, with beautiful beaches and delicious seafood. It was chosen as one of the filming destinations of the Hollywood blockbuster movie “Kong: Skull Island”. -VNA